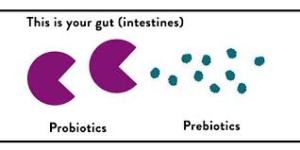 What the Heck is the Microbiome?

Much attention has been spent lately describing the health contributions of the microbiome defined as “non-human cells that outnumber human cells and consists of our microbe residents in the human gut, skin, eyes and nasal passages.” These bacterial cells collectively can weigh as much as six pounds.

Another term for the microbiome is the microbiota.  The composition of the microbiota plays an important role during pregnancy and in early life and may affect our metabolic and immune functions later in life. The gut microbiota helps our digestive system efficiency, improves nutrient availability and absorption, and limits the presence of pathogens through competition for nutrients and space.

From the moment of birth, the newborn is exposed to microorganisms obtained from the birth canal of the mother or by exposure to the mother’s skin during a C-section delivery. This colonization is influenced by many factors such as genetics, breast-feeding or formula feeding and weaning to solid food as well as the presence of antibiotic therapy. It is thought that by 2 years of age, the young infant will have established its own stable microbiota. Recently stress and the mother’s diet during late pregnancy may play a role in this initial colonization of the young child.

From studies, it was shown that differences in the gut microbiome during the first year of life may later lead to the onset of obesity. In one study, the numbers of Bifidobacterium species (considered beneficial) were higher and the numbers of Staphylococcus aureus (potentially pathogenic) were lower in children who maintained a normal weight than in children who became overweight at 4 years of age suggesting this pattern may be protective against obesity. In other studies, it was observed that there is a link between the composition of the microbiome during pregnancy and body weight. More specifically, the presence of Staphylococcus and E. coli numbers were higher in women with excessive weight gain during pregnancy. Fecal transplant of an obese microbiome to germ-free mice resulted in a greater increase in total body fat than did colonization with a “lean microbiome” suggesting that the change in the intestinal microbiome environment can promote obesity and other metabolic diseases later in life.

How can we control the content of the microbiome? Guess what – eating more fruits and vegetables have a prebiotic effect on the microbiome.  Prebiotics are nondigestible carbohydrates that reach the colon intact and are known to help the growth and activity of healthy (friendly) bacteria in the gut like Bifidobacterium species.

Increase your intake of unpasteurized fermented foods like fermented dairy products such as yogurt or kefir that contain probiotics. Probiotics are defined as live microbes that offer a health benefit to humans. Bifidobacteria and Lactobacillus species are the most common bacteria groups used.

Use more herbs such as garlic and leeks which contain the prebiotic inulin. Inulin is  a fermentable carbohydrate that is found in some fiber or protein bars. Inulin can cause digestive trouble or aggravate irritable bowel syndrome for some people as there is a threshold of tolerance for their intake. Look on ingredient labels for inulin or chickory root extract.

The study of the microbiome continues to fascinate scientists and its presence may be more involved in our health than previously thought.  But the research is still in its infancy and caution should be stressed so that people do not rush to buy probiotics or attempt self-treatment.  The transplants are experimental and should only be performed by professionals.  A limited number of studies have shown it to be an effective treatment for patients suffering from Clostridium difficile infection (CDI). CDI is a serious and difficult to treat infection causing inflammation of the lining of the abdomen; it is mostly found in  hospitalized elderly patients after excessive use of antibiotics but can affect an estimated 3% of healthy people.