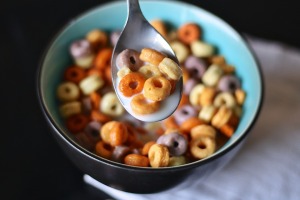 When in the supermarket, have you noticed lately the extent of the cereal aisle?  How many choices do we need? A lot of people start the day with their favorite. For example, an all-time favorite of Frosted Flakes states on the box – “Sweetened Flakes of Corn Cereal.” but also contains wheat starch. But what else do we find?

First we see that primarily, 1/1/4 cup serving provides us with:

They do provide some entertainment on the box with a fun game of FIND A PENGUIN FRIEND (sort of a take off of Where’s Waldo.) if you get bored eating the cereal.

How did all this begin? In other words, how did we get here? 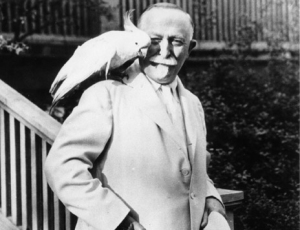 John Harvey Kellogg was born in 1852 in Tyrone, Michigan and died at the age of 91 in Battle Creek, Michigan He was a medical doctor and graduated from New York University Medical College at Bellevue Hospital in 1875. He married Ella Ervilla Eaton in 1879 and had no biological children except for 42 foster children, legally adopting eight of them before Ella died in 1920. He had one brother, Will Keith Kellogg.

After medical school, he became the chief physician in 1866 at the Western Heath Reform Institute of Battle Creek, founded by the Seventh Day Adventist leader, Ellen G. White. This soon became the Battle Creek Sanitarium, aka “the San” and its health principles were based on the Church including vegetarianism. Through the years, the San had many notable patients/guests that included former President, William Howard Taft, arctic explorers Stefansson and Amundsen, writer and broadcaster, Lowell Thomas, aviator Amelia Earhart, playwright George Bernard Shaw, athlete Johnny Weissmuller, Henry Ford, Thomas Edison and actress Sarah Bernhardt.

Dr. Kellogg believed that almost all disease began in the stomach and bowels and promoted daily yogurt enemas to clean the intestines. He also encouraged his guests to practice breathing exercises and mealtime marches to promote proper digestion during the day. He strongly believed in nuts which he thought would save mankind in the face of decreasing food supplies and developed a patent for making peanut butter. He also thought that coffee was unhealthy for the liver and that indigestion was the leading cause of death. Most spices were unhealthy and vinegar was a “poison, not a food.”

While a medical student in New York in 1874-75, Kellogg began to be aware of the need for ready-cooked foods, at least ready-to-eat cereals. As part of the “Sans” menu, Kellogg and brother Will made several grain products by forcing wheat grain through rollers to make sheets of dough. One time, the dough seemed overcooked and the dough when flattened emerged as a flake. After this, the sanitarium became famous for its wheat and corn flakes. Many guests had complained that the hard biscuits they served had played havoc with their teeth, so the invention of the flake alleviated this issue.

Kellogg believed that most disease is alleviated by a change in intestinal flora; that bacteria in the intestines can either help or hinder the body; that pathogenic bacteria produce toxins during the digestion of protein that poison the blood; that a poor diet favors harmful bacteria that can infect other tissues of the body; that the intestinal flora is changed by diet and is generally changed for the better by a well-balanced vegetarian diet favoring low-protein and high fiber foods. Ironically, the theory that intestinal bacteria influence some disease states is gaining favor recently – maybe Kellogg was correct to a point.

By 1905, the Kellogg brothers were selling their corn flakes under the name of the Sanitas Company and had competition from a number of other companies in Battle Creek. One of his former patients, C. W. Post had started his own cereal company and Kellogg accused Post of stealing his corn flake formula. Will Kellogg wanted to add sugar to their cereals, but Dr. Kellogg disagreed with him. C.W. Post added sugar to his cereal however. Will left the Sanitarium and started the Battle Creek Toasted Corn Flake Company in 1906. The brothers had a strained relationship over business dealings in which Will sued his older brother. The case lasted for most of the rest of their lives with Will eventually winning the suit.

John Harvey continued to run the San but due to the Depression, it was sold. He did establish another health institute in Florida.

So this is a brief history of the vast ready-to-eat cereal industry we presently enjoy. Lately there has been a recommendation to lower our sugar intake and cereals are often named as “culprits.” Even though Dr. Kellogg was often thought of as eccentric in his beliefs, his thoughts on adding sugar to his corn flakes may have been prudent and Tony the Tiger would not be in so much trouble today with its added sugar content.

I wonder what John Harvey would think now.