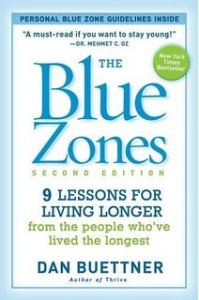 Ponce de Leon began his quest for the fountain of youth in 1531 and humans have been seeking magical solutions for keeping us younger and living our later years in relatively good health.

In 2009 with the backing of the University of Minnesota School of Public Health, AARP and the National Geographic, Dan Buettner established the Blue Zone Project and authored The Blue Zones: 9 Lessons for Living Longer from the people who lived the longest, He interviewed those who were either centenarians or those in their later years and began to investigate what factors may have contributed to these long lives. He identified five regions that for various reasons had populations meeting this criteria:

Remarkably, all the regions had common characteristics that included family and purpose, community and spirituality, stress reduction and physical activity..

One major practice was that all their diets, though not vegan, were predominantly based on plants. Meat and other animal products were either the exception or used as a condiment. Okinawans, practice a philosophy called hara-hachi bu regarding food; they only eat until they are 80% full.

In the Costa Rican Zone, everyone feels like they have a plan de vida or life plan. Even at ages above 60 and 70, inhabitants don’t stop living. They keep themselves busy; they love to work. It provides them a “reason to waking up in the morning” called ikigai. There is no word for “retirement” in Okinawa.

The final chapters of the book boil it all down into nine lessons and a cultural distillation of the worlds’ best practices in longevity. Beuttner provides credible information available for adding “years to your life and life to your years.”

However, there is a downside. From the author: “Sardinians today have already taken on the trappings of modern life. For example, junk foods are replacing whole-grain breads and fresh vegetables traditionally consumed here. Young people are fatter, less inclined to follow tradition, and more outwardly focused.”

From the author: “I once pressed a 101-year-old woman in Ikaria, Greece to tell why she thought people there lived so long. ‘We just forget to die,’ she said with a shrug. None of them went on a diet, joined a gym, or took supplements. They didn’t pursue longevity – it simply ensued”

Since the first book, Mr. Buettner has published two other books that continue to describe the lifestyles of these regions. They include The Blue Zones Solution and The Blue Zones of Happiness. I’ve enjoyed these books immensely and have often referred to them in various tweets and posts. The first book concludes with a chapter on Your Personal Blue Zone. Other books give us more explicit ways to establish Blue Zones in other areas in the U.S.

From the back cover of The Blue Zones Solution – “Propagating the Blue Zones would not only prevent a rise in the prevalence of diabetes (and other such misfortunes); it would allow us to eliminate more than 80 percent of the burden we have now. That’s revolutionary.”

All these books are highly recommended, in my opinion. They not only teach us valuable information to remain healthy in our later years, i.e. a longer lifespan of optimal health,  but they also present a relatively comprehensive and colorful glimpse of their individual lives and culture.